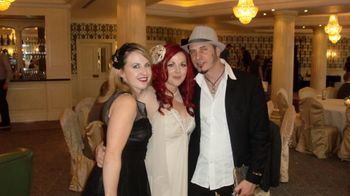 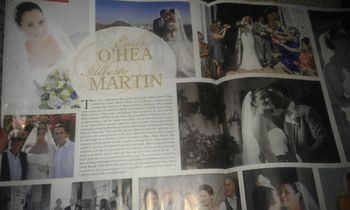 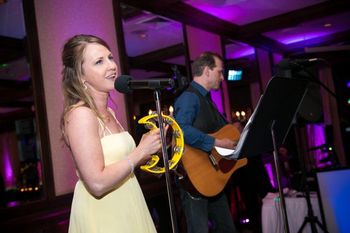 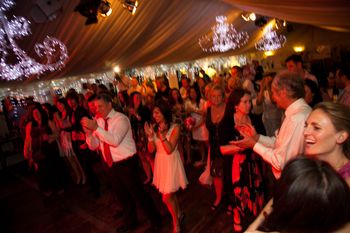 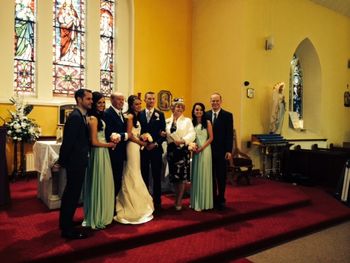 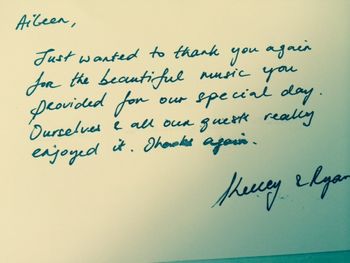 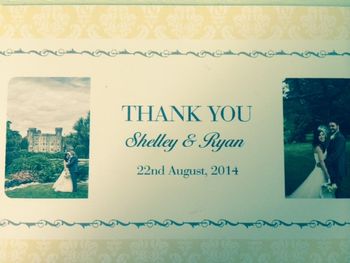 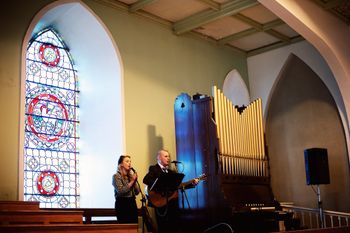 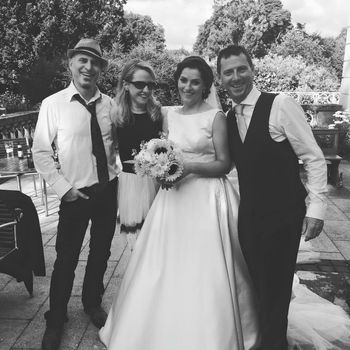 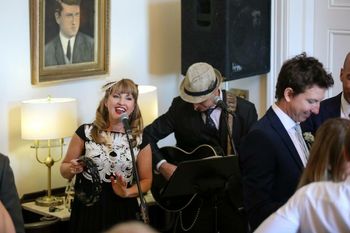 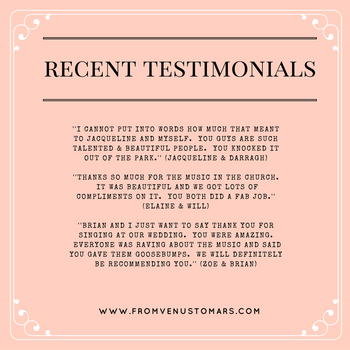 Share photo gallery
CEREMONY
When our church singer cancelled two days before the wedding these guys stepped in and did an absolutely fantastic job. They made the ceremony as perfect as I had imagined and hoped it would be. Thank you!!!!

CEREMONY & DRINKS RECEPTION
We had Aileen and Kieran perform at both our church ceremony and reception drinks and they were amazing. They traveled to Cork a day early to make sure they could perform as there was really bad flooding in the area on the day of our wedding and they were willing to learn new songs which we really wanted to play at our ceremony. So many of our guests commented on how great they were and we couldn't have been happier. Thanks again guys, you were amazing.

Brian and I just want to say thank you for singing at our wedding.  You were AMAZING!  Everyone was raving about the music and said you game them goosebumps.  We'll definitely be recommending you in the future.

''Thank you so much for the music in the church.  It was beautiful and we got lots of compliments on it.  You both did a fab job.''

''I cannot put into words how much that meant Jacqueline and myself.  You guys are such talented and beautiful people.  You knocked it out of the park''.

''You guys were amazing.  Perfect tone for the ceremony, really beautiful and you kept the dance floor jumping that night.  You are so talented and the fact that you love what you do is infectious - really contributed to the atmosphere.  I actually don't think I stopped dancing at all...much to the neglect of some of the guests!  I hope you enjoyed the day as well.''

''Thanks to Aileen and her band members for a great night at the weekend!  Our wedding guests had nothing but great things to say about the music!  Delighted we chose you for our special day and wish you the very best for the future.''

''Thank you so much to you and Kieran for the music on Saturday.  It really really added to the whole feel of the mass from start to finish.  It was very special and the music played such a big part of that.  So many people came up to us and commented on both your voices and just how beautiful they were.  Thank you as well for the whole lead up to the mass, you were a pleasure to speak with and so accommodating and reassuring.''

''If it's a standard wedding outfit you want, look elsewhere! If it's verve, style and originality you're looking for, you're in the right place ...
Having booked the band last September for our bash in Wexford we were delighted at how Aileen and Kieran tailored the set to what we knew would go down so well with our friends. On the night they brought that and more to the performance. A pretty untypical wedding band -- we couldn't have asked for more.''
(FRANK & RACHEL SHOULDICE  - HORETOWN HOUSE, WEXFORD)
EVENING RECEPTION - DECEMBER, 2014

We can't speak highly enough of these guys.  Aileen was such a pleasure to work with and delivered exactly what we were looking for.  You played a beautiful first dance song for us and had our guest up dancing all night.  A really nice range of songs and all played really well.  Would highly recommend From Venus to Mars.''


CEREMONY - OCTOBER, 2014
Aileen and Kieran made all the joy and love that we felt that day palpable to the whole congregation. We tasked them with a big mix of secular, gospel and traditional music and they rose to the challenge fantastically. My only regret is that we only booked them for the church, we could have listened to them all day. If you are looking for great musicians who are willing to really work with you, listen to what you need and empathise with you about your day, you really need to talk to these guys''.

''We didn't get a chance on the day but we just wanted to thank you for the amazing music at Johnstown castle. It was so beautiful. Guests were raving about you both! We had an absolutely fantastic day, could not have asked for more. Thanks again for being part of it.
(SHELLEY & RYAN - JOHNSTOWN CASTLE, WEXFORD - AUGUST, 2014)
CEREMONY/DRINKS RECEPTION - JUNE, 2014

Where do we start!!!??? Without a doubt Venus to Mars were the highlight of our wedding! Both in the church and back at the drinks reception. They are still the talking point from all our guests and we felt so lucky to have booked them for our special day. They created the most unbelievable atmosphere in the church and we will never forget it. They both have the most amazing chemistry and complement each other perfectly. Together and individually as artists they have talent to burn! I wouldn't hesitate for a second and book them if you can!!!  xxxxx

''We didn't get a chance on the day but we just wanted to thank you for the amazing music at Johnstown castle. It was so beautiful. Guests were raving about you both! We had an absolutely fantastic day, could not have asked for more. Thanks again for being part of it.

CEREMONY/DRINKS RECEPTION
Where do we start!!!??? Without a doubt Venus to Mars where the highlight of our wedding! Both in the church and back at the drinks reception. They are still the talking point from all our guests and we felt so lucky to have booked them for our special day. They created the most unbelieveable atmosphere in the church and we will never forget it. They both have the most amazing chemistry and complement each other perfectly. Together and individually as artists they have talent to burn! I wouldn't hesitate for a second and book them if you can!!!  xxxxx

CEREMONY
''We were lucky enough that Aileen and Kieran were free to play at our wedding ceremony. They were amazingly supportive throughout the journey. They couldn't have been more helpful in assisting us to choose the songs and put in a lot of hard work behind the scenes learning new songs and adapting the whole thing to fit us and our style perfectly. I was familiar with their music prior to the day but to say they blew me away, along with all our guests is an understatement. They are so professional and they are extremely versatile with what they produce. Their voices are stunning both individually and together. They had my dad in tears which says it all! They sing with such emotion and enthusiasm and they were without a doubt the highlight of the day. You would be very lucky to get these guys to take part in your special day!!''

FVTM sang at our wedding  ceremony and were absolutely amazing. Right from the start, when I had asked her to sing, she was extremely professional, helpful and flexible. I was provided with a complete list of ideas for songs, spanning all tastes and themes, which we then worked through together to finalize our set, which also included songs that were not on Aileen's list, but she had absolutely no issue at all learning them and including them.
This is even before we get to Aileen's voice! On the day of our wedding, she blew us away with her voice. A person's wedding is such a special day, and Aileen made it all that bit more special, with beautiful songs and an amazing voice. I could not recommend Aileen enough - hearing is believing.

EVENING RECEPTION
From the moment that Aileen sang our wedding song (there wasn’t a dry eye in the room) to the close of the evening, they were absolutely incredible. The range of music they can perform is immense and there was something for everyone regardless of age. As soon as dinner was over and it was time to let our hair down, they had every single person on the floor, letting it all hang out! The marriage of Kieran’s musical talent and Aileen’s wonderful voice creates a sound that made every guest at our wedding yell for more. The diversity of their music was perfect for an occasion such as a wedding. You know people had a great time when they are cheering for an encore after the band leave the stage.